Demand for Botox Predicted to Grow

Demand for Botox Predicted to Grow 50% within 10 Years

The demand for botulinum toxin type A cosmetic products (Botox Cosmetic®, Dysport® and Xeomin®) in the United States is predicted to grow 50% over the next 10 years, according to a new report by Injector 5280.

Demand for Botulinum toxin type A treatments (referred to as Botox) has been strong and steady over the last 9 years. Even in 2008 in the midst of the recession, demand dipped only slightly.

According to the latest report from the American Society of Plastic Surgeons, more than 6.3 million Botulinum toxin type A cosmetic treatments were administered in the United States last year.

Injector 5280 predicts the Botulinum toxin type A market will reach at least 9.5 million cosmetic treatments by 2024, representing a 50% increase in demand within the next 10 years:

Future trends were predicted through in-depth analysis of data released by the American Society of Plastic Surgeons, in combination with the importance, probability and implications of other factors in the Botox market.

Why is the Demand for Botox expected to Increase?

1. Botox is Mass Market. Once it seemed only celebrities and affluent baby-boomers opted for aesthetic injectables, but Botox is now common place for the everyday person.

Increasing numbers of people are seeing minimally-invasive procedures as a viable option. According to the American Society of Plastic Surgeons, botulinum toxin type A cosmetic treatments were the most popular ‘minimally-invasive cosmetic procedure’ last year.

With the ease of treatment, increased accessibility to local providers and the affordable cost of Botox, it is predicted that Botox will continue to grow as a mainstream aesthetic treatment over the next 10 years.

2. A Shift in Cultural Thinking. Recently there has been a much greater social acceptance of aesthetic injectables. Ten years ago a Botox treatment may have been seen as vain or gratuitous, however people are now much more accepting.

Media coverage of celebrities and Botox has got everyone talking about injectables. Botox has become a household name, and even a verb. People are now seeing Botox as another part of their beauty routine. Some women highlight their hair, some get their nails done – others see Botox as just another available beauty option.

In most cultures over the next 10 years, it is anticipated that there will be an even greater social acceptance of Botox as a form of beauty maintenance.

3. Increased Spending on Beauty. According to Yahoo! Shine, women reportedly spend $426 billion a year on beauty products. Women, who account for 94% of the Botox market in the United States, are also spending their beauty dollars on Botox.

With an optimistic economic outlook projected over the next few years, spending on beauty products is expected to increase, as well as spending on Botox.

4. Botox not ‘Economically Sensitive’. Even in an economic downturn, Botox has proven not to be acutely economically sensitive.

In the midst of the most recent recession, the number of Botulinum toxin type A cosmetic treatments dipped only slightly – treatments fell by as little as 4.4% in 2009; while the following year the number of Botox treatments jumped 12.2%, even though the economy was still sluggish: 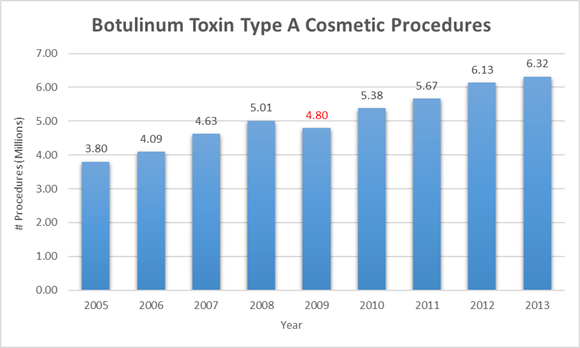 5. Increased Quality of Treatments. Botox isn’t a cookie-cutter treatment and a good result takes more than a ‘one size fits all’ approach. Injectors now understand in order to gain patient satisfaction and retention they need provide a customized treatment. Results have greatly improved over the last 10 years and consequently so have patient satisfaction rates. 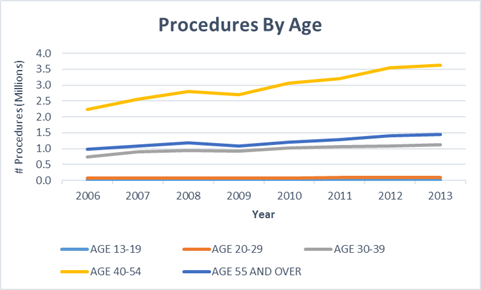 The 40-54 demographic are typically mature in their careers, and statistically the highest wage earners. In their struggle against aging, this demographic also has good reason to spend money on beauty products.

Even as little as one generation ago, we didn’t see advertising of anti-aging products like we do today. Older adults are becoming increasingly aware of the options available to them.

The 40-54 age group is a very important market for manufactures of Botulinum toxin type A and a significant reason why historical sales have been so strong. Last year the 40-54 age group represented 58% of the market in the United States.

With greater education and increasing desires to preserve a youthful appearance, it is predicted that consumer demand from this age demographic will further increase over the next 10 years.

7. Younger Adults are currently the Fastest Growing Market. The largest age group choosing Botox for cosmetic treatments have tended to be 40-54. However last year, there was an increasing demand from people in their thirties.

Over the last 2 years the demand for Botox has continued to rise for all ages, however the fastest growing age group last year was 30-39. Demand from this age demographic increased by 4% – the largest growth rate compared to any other: 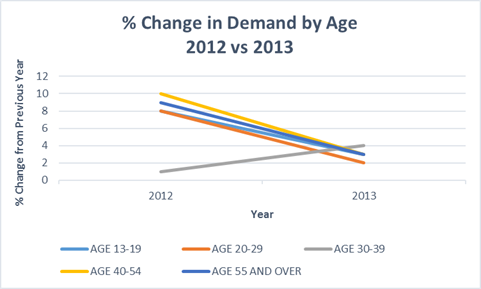 At around the age of 35, collagen production starts to decrease and skin loses its elasticity. Lines and wrinkles start to appear and people begin to see changes in the mirror. Again, people in their thirties are becoming increasingly more educated about their available options, making Botox a viable treatment option. 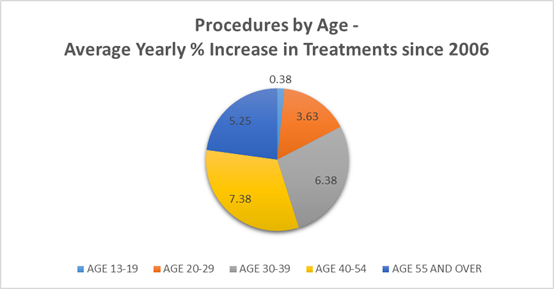 The thirties market is a relatively untapped Botox market and becoming increasingly important. It is predicted that awareness of Botox will continue for people in their thirties, and demand from this demographic will subsequently increase over the next 10 years.

8. Awareness of Preventative Botox. The growth in demand for Botox has, in part, also been generated by younger people realizing that Botox isn’t solely used for correction.

Younger adults are starting to see the benefits of being proactive when it comes to beauty maintenance. Indeed, the tag line for Injector 5280’s medical practice is ‘Proactive Medical Aesthetics’, highlighting the value of prevention.

As increasing numbers of people see the preventative benefits of Botox it is predicted that demand for Botox will also increase.

9. The Emergence of the ‘Bro-tox’ Era. Interestingly, the number of men choosing aesthetic injectables is also rapidly growing. The American Society of Plastic Surgeons reported that between 2000 and 2013, the demand for Botulinum toxin type A cosmetic treatments from men increased by 310%.

Men are starting to realize that the ‘furrowed-brow’ look is out, while a fit, refreshed and youthful appearance is in. Frown lines on men’s faces can make them appear stressed, worried, aged and even angry. With competitive workplaces and assertive social scenes, there has never been more pressure on men to look refreshed and youthful.

Although men currently only represent 6% of the overall Botulinum toxin type A cosmetic market in the United States, Botox is proving to become an increasingly viable option for them. It is predicted that more and more men will choose Botox over the next 10 years.

10. Growing off-label use. Although Botox Cosmetic is only FDA approved for a limited number of facial areas, advanced injectors are using Botox to treat other areas of the face.

For example, Botox Cosmetic is also successful in treating the depressor anguli oris muscles to elevate drooping corners of the mouth. Botox can also be used to tighten platysmal bands in the neck, creating a sharper profile.

Although not FDA approved indications, these procedures are considered well known to some advanced Botox injectors.

It is predicted that off-label use of Botox will continue to grow the market for Botox, and thus increase the overall number of Botox treatments performed.

As Botox manufacturers continue to prove successful indications for use, more FDA approvals will lead to more people becoming aware of the benefits of Botox for use in those new areas.

With more indications for the use of Botox, it is predicted that demand for those treatment areas will follow suit.

With the ever increasing popularity of anti-aging products and our desire to preserve our youthful appearance, greater numbers of people are opting for the needle.

Injector 5280 expects the demand for Botulinum toxin in the United States for cosmetic treatments to grow at a strong and consistent rate over the next 10 years. Even if the economy falls into a recession at any point during that time, long term growth is likely to stay strong.

In summary, growth will be stimulated by new market opportunities as well as developing existing markets. Botox will also ride the cultural wave of a growing acceptance of aesthetic injectables, together with an increasing education and demand for anti-aging treatments. Additionally, treatment accessibility and increasing treatment satisfaction rates will further drive the demand for Botox.

The next 10 years will be an interesting time in the Botulinum toxin cosmetic market. It is expected that sustained growth in the Botox market will lead to substantial profits for the manufacturers. Companies such as Allergan, the billion dollar company behind Botox Cosmetic has every reason to be optimistic about their future.